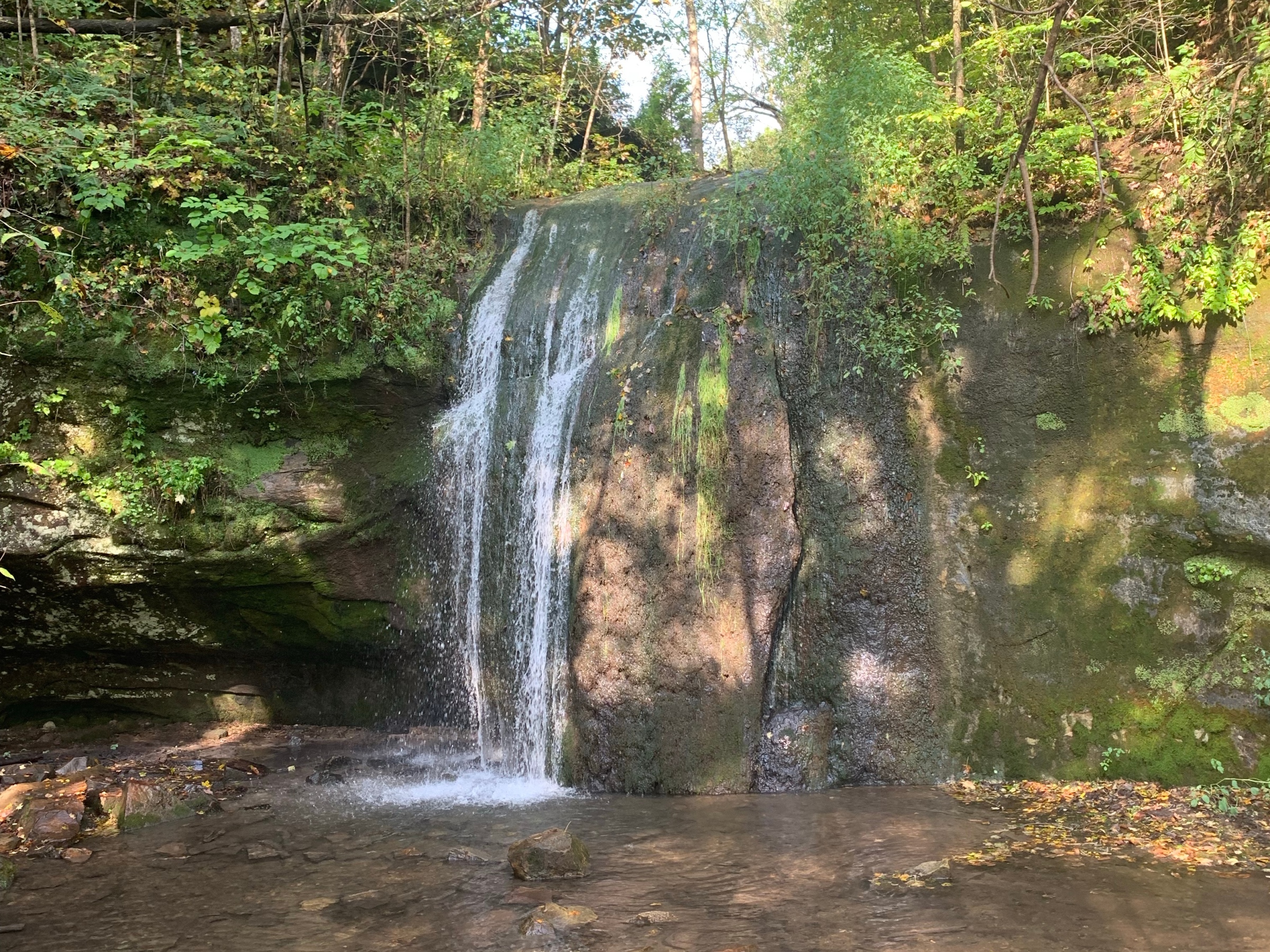 I had this experience at a park I’ve been going to for years, Governor Dodge State Park. Living in Madison, this park is an easy drive for a day-trip. Although I’ve been to the park numerous times I somehow never explored the area around one of the park’s main attractions, Stephens Falls. I’ve been to the falls but it was always full of multiple groups of people. Maybe that’s why I ignored all the trails around it. I tend to avoid crowds, especially in natural areas when I’m trying to get away from people. Boy, was I missing out.

The initial trail from the parking lot is an accessible trail, paved and flat. This trail leads to an overlook above the falls which offers a nice view. Hikers have the option from there to climb down some uneven rocky steps to the base of the falls. Doing this will bring you along the Stephens Falls Trail. This trail follows along the creek to the point where it meets the Lost Canyon Trail.

The Lost Canyon trail begins through grassland before turning into the forest.

After a short while on the trail, you meet back up with the Stephens Falls Trail. This is the back side of the trail, where it ends.

The trail crosses the stream (downriver from the falls) before traveling next to it as it heads back towards the falls.

This part of the trail is kind of a choose your own adventure situation. The trail is vague and people seemed to be walking on either side of the stream. As long as you follow the stream, you’ll get to where you want to go, the falls.

Enjoy the view along the way. The stream bed is rocky and makes a bunch of cute little itty-bitty waterfalls.

At the end of the trail (or the beginning, depending which direction you started) is Stephens Falls. This waterfall is a little over 20 feet tall.

The water at the base of the falls is shallow and several people were walking in it to get closer to the falls. If it’s a hot day, enjoy the cool and refreshing air around the falls.

The stairs leading down from the paved trail and lookout above.

After visiting the falls, we backtracked to the Lost Canyon Trail to continue on.

The Lost Canyon Trail continues to meander next to the stream and crosses it in several places.

The rocky outcroppings continue as you go and become larger. I was surprised at the size of these. Some of them get quite huge.

As the trail continues, it begins to climb up. This hill got pretty steep and seemed to go on forever. (This hill is the reason for the “moderate” trail difficulty rating. This hill came out of nowhere but made sense when we arrived at the overlooks. After beginning at the base of the canyon, you climb to the top.

A weird feature about this trail, it has not one, but two spring houses along it. The park in general has an above average number of spring houses but to find two on the same trail has to be a record.

The trail continues along a meadow. This time of year the air was full of monarch butterflies.

Just when I thought we were nearing the end of the trail, it had another surprise for us. We stumbled upon an area not listed on the map, the Stephens homestead. Later I learned this area was added in 2012 to showcase the farming and homestead history of the Stephens family.

Early farming equipment and the remnants of the old barn are still on the site today. A sign near this area informed me that two horses ran over the falls in the 1920’s. One was blind and the other was spooked in a thunderstorm. Poor horseys.

Today this foundation is all that’s left of the original cabin. A sign near the site reads “In 1854, Alex Stephens built a cabin in anticipation of his upcoming marriage to Martha Nelson. The cabin was approximately 11′ x 15.’ By 1874, Alex and Martha were still living in the cabin with nine children.”

Eventually the family went on to build a larger two-story house but lived in this home for at least 20 years. How this family of eleven people lived in this house for so long is beyond me. The original home was later repurposed as a chicken coop. I wonder if it was sad for the family that their original home was so small it was great for chickens. At least the chickens were happy.

Down the trail towards the end of the journey is the second spring house. This one was used by the Stephens family for water and food preservation.

The water inside is crystal clear and ice cold.

The Lost Canyon trail meets back up with the paved Stephens Falls trail.

This huge 5,350 acre park has a ton more hiking and lots to see. We only hiked this small section as we had a date to meet the in-laws (for me, anyway) at one of the park’s lakes for some fishing.

At least some fish were biting that day!

One Comment on “Wisconsin’s Governor Dodge State Park — A Waterfall, A Canyon, and Farming History”