Perrot State Park, Rain and Romance, Bluffs and Bling, An Engagement With a View 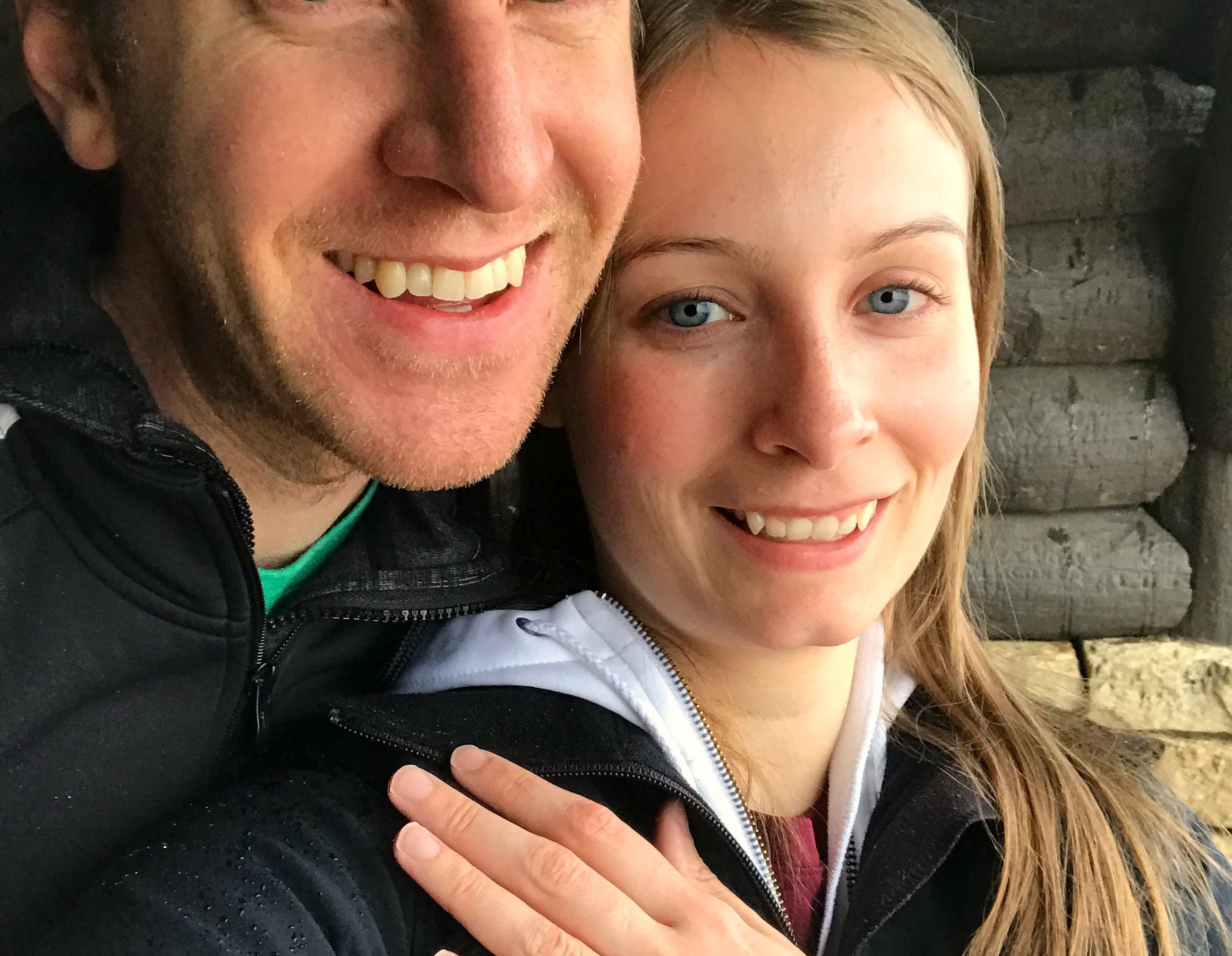 Do you have any favorite parks or trails that you keep returning to over and over? Have you hiked these trails so many times that you could do it with your eyes closed? What is it that keeps calling you back? I have one of these parks in my life, and more specifically one of these trails. For me, it’s Perrot State Park and Brady’s Bluff East Trail.

I’ve hiked this trail every year for the last three years now. It has become something of an annual pilgrimage to journey to the top of the bluff and look over the mighty river below. It has also taken on a special meaning in the relationship with my boyfriend, Jon. Being one of the first parks we explored together, back in the days when Jon despised camping, it was the park that truly amazed us with natural beauty and sparked the passion for hiking and camping that has been such a large part of how we spend our weekends for the majority of the year.

It’s only fitting that this park would be the site of the question that solidified our relationship even more.

That’s right, friends, this post is more than just a trail review, it’s an engagement story.

The Brady’s Bluff East Trail begins at the mound parking lot near the park’s headquarters. (I’m getting deja vu describing this hike for the third time now.) Near the trail head, this trail splits into two. Turning left will start you on the Brady’s Bluff East Trail while continuing straight will start you on the Perrot Ridge Trail. Both trails are challenging bluff trails and offer breathtaking views. The two trails connect between the bluffs so if you choose to begin with one, you can end with the other.

See the TRAIL MAP to follow along for reference.

We took the left trail and began the Brady’s Bluff East Trail.

I should pause to set the scene. It was mid-October, leaves were at about 50% peak color, and the forecast for the day was cloudy with 100% chance of rain. It had already been raining on and off that day and the radar showed more rain on the way. The ground was covered in wet leaves and the air was damp and cool.

The trail begins by climbing down and crossing a small stone path. (This view is looking back towards the trail head.) Like I said, it was a wet day. Not the most ideal day for a hike.

As this point the trail is mostly flat. It starts easy, but it doesn’t stay the way for long. The trail takes on a gradual climb before switching to a steeper, more urgent ascent.

From there the trail begins winding up and around as it makes it’s way to the top of the bluff. The trail is less than a mile long but remains one of the more challenging trails I’ve covered on my blog. The top of Brady’s Bluff towers about 520 feet above the river below and this trail makes that climb in 0.7 miles. At least you are rewarded pretty quickly by views overlooking the river. 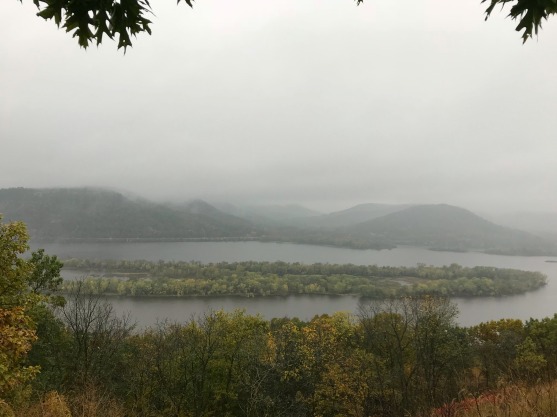 The higher we climbed, the foggier and harder to see it became. We were climbing into a cloud! 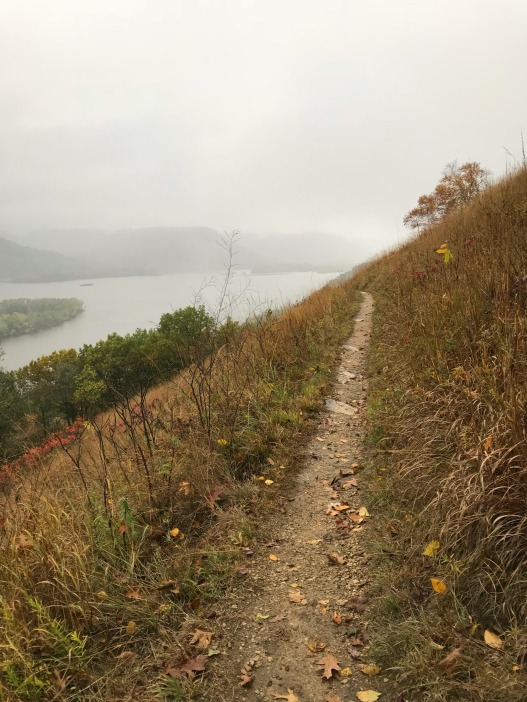 This is my favorite part of the trail. Here the trail opens from the tree cover to a grassy area on the side of the bluff. It feels so out of place that it always sticks out to me.

After climbing the majority of the bluff through a slight mist, we reached the final push. This part always feels like the biggest challenge on this trail to me. Your legs are tired from walking uphill for so long and now you’re presented with stairs. This leads to the top of the bluff and a well deserved rest.

Once on top, the view was that of clouds rolling in. The mist turned to a sprinkle, and the sprinkle to a rain. We retreated to the shelter at the top to wait it out. We were totally engulfed in a cloud.

Visibility decreased and all you could see was a wall of grey surrounding you.

Hiding in the shelter from the storm outside, with the sound of rain on the roof and the stone walkway, my best friend got down on one knee and asked me to marry him. I said yes, of course!

Soon after this moment, the rain stopped. The storm that had ensured privacy for us moved out. Nature helped us celebrate by treating us to a unique, smoky looking view of the river and surrounding bluffs. A few strong gusts of wind threw leaves into the air, looking like natural confetti. Did we just get nature’s approval and congratulations? I think so. 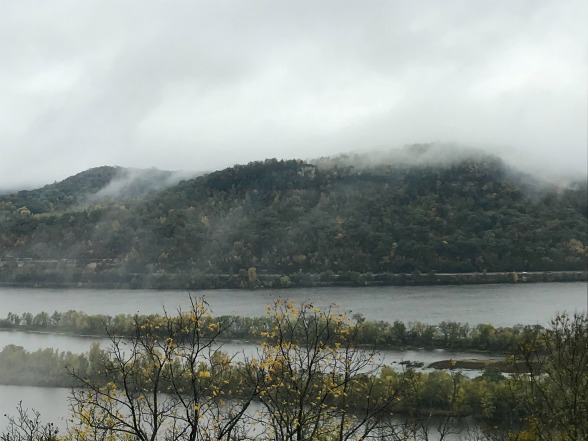 After taking in the moment, enjoying the breathtaking views, and calming down a little from the excitement, we headed back down the same trail. With all the rain trying to make it’s way down the steep trail with us, the rock stairs were slippery and some of the ground had turned into mud. This created a challenge different from the one on the climb. Despite doing our best to be careful, there were a few skids on the way down, but thankfully no slips or falls.

Emerging from the trail as a newly engaged couple, it was time to head into La Crosse to celebrate!

2 Comments on “Perrot State Park, Rain and Romance, Bluffs and Bling, An Engagement With a View”