Ah, the ocean. There’s nothing quite like the sound of crashing waves, the smell of fish in the air, and nothing but water as far as the eye can see…. 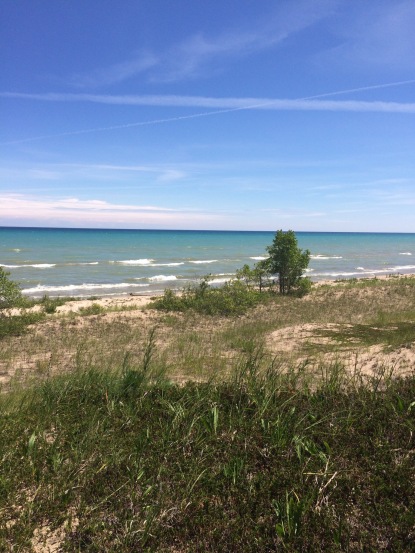 Just kidding, I know that’s a lake. I will admit, though, that Lake Michigan is a decent substitute for the ocean when traveling to a coast is too much of a time and financial commitment. If you plan to swim, think of it as the Pacific Ocean. It’s pretty cold.

This park has a lot to do for visitors. Hiking, camping, and swimming are all popular choices here. Rawley Point Lighthouse is found inside the park. This lighthouse is still operational so the grounds are off limits and tours are not given. It still makes for a great photo opp.

Planning to camp at the forest later in the day, we arrived early afternoon to hike before check in. We parked in the parking lot next to the lodge and nature center. This connected easily to the start of the Ridges Trail, the longest trail at the park. This trail is made up of 3 loops, totaling 7.5 miles.

This loop beings by taking you through the campgrounds, back towards the entrance to the park. It is wide, paved, and shared by bikers. This trail is widely used by visitors. From this trail the lake is not visible on either direction of the loop.

This loop continues from the red loop. Without a sign, you wouldn’t know you were on a different trail. Like the first, this trail did not have views of the water. It continued to be tree covered through the forest. This section of the trail was not paved, and instead changed to dirt. 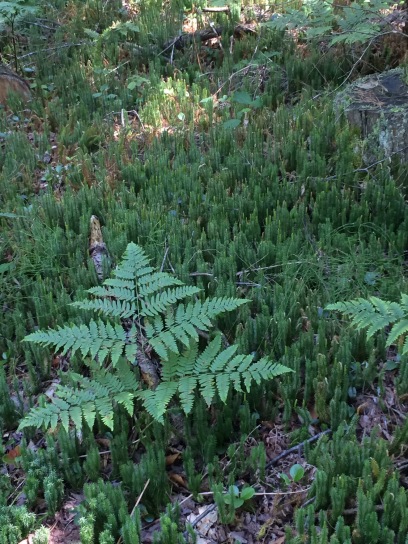 Can you see her? This lady made an appearance on the trail. She jumped out in front of us, ran down the trail for about 10 feet, before running into the forest. She was nice enough (or scared enough) to pause for a picture.

By this time, I will admit, hearing the lake but not seeing it was disappointing. Especially when we knew we were heading back on the trail on the side nearest the water. So close, but so far. I was further annoyed by the swarms of bugs. Of course mosquitos are expected anywhere you go, but this forest, being so near the lake, had large pools of standing water that were perfect for breeding. I was almost ready to write this entire trail off as a bust when this little gem appeared. What’s this? A sandy trail up a dune? I’ll bite… 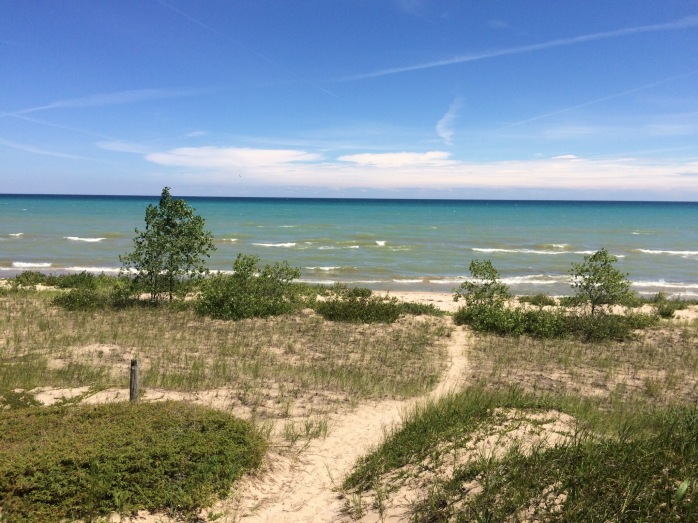 Finally! Totally worth it. It appears this is also a hidden beach. For those willing to hike, this spot could be a nice, private day by the lake.

From here we headed back to the lodge and nature center, which, happy day, also has concessions. Eating ice cream by the lake as a reward for a 7 mile hike. This was a great way to celebrate a job well done.